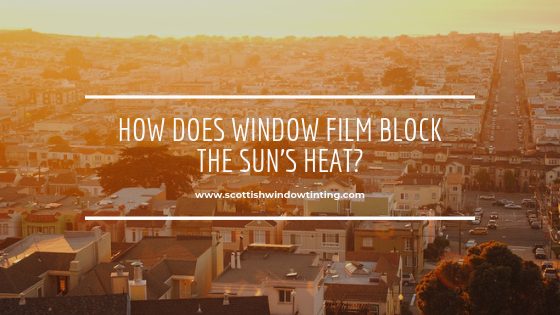 How Does Window Film Block the Sun’s Heat?

There’s nothing worse than stepping inside to a hot home. After a long day in the summer sun, all you want to do is relax in the cool, quiet comfort of your home. But if it’s just as hot inside as it is outdoors, it’s hard to relax. The heat makes us tired, distracted, and, worst of all, irritable.

That’s why so many people these days invest in window film for their home. If you’re not familiar with residential window film, you may be wondering, how can it control the temperature of my home? That’s a great question! In this article, we’ll discuss exactly how window tinting works to control heat, glare, and uv radiation.

Window film is made up of two important components: a durable sheet of spectrally selective polyester film and an adhesive layer that binds the film to the window. Measurements are taken of the window and the film is cut to the right shape and size to match. Then, the liner is removed, exposing the adhesive, and the film is applied to the glass with a squeegee.

How Does Window Film Work?

Window film is by far one of the most effective and aesthetically pleasing ways to control heat in a home. Unlike blinds, it doesn’t make the room dark inside. And it looks much better than black pull-down sunscreens. But what makes it so effective? In order to understand how window film works, it’s important to grasp two concepts: what the film is made of and how it interacts with the electromagnetic spectrum.

Window film is spectrally selective, meaning that it only certain types of light can get through it. The film itself is made of a tear resistant material called polyethylene terephthalate (PET) that reflects heat. This material is created in very thin layers and stacked together to create a single sheet. Many manufacturers also add ceramic or metal particles to the film for extra power. A hard outer coating protects the film from scratching and the inner adhesive helps it stick to the glass.

Sunlight contains many frequencies that we don’t see. Visible light is only one type of light. Window film works by blocking all the types of light that you don’t want in your home, i.e. those that cause glare, heat, and fading. Visible light has no problem passing through its surface. But only a very small amount of infrared heat and uv radiation can get through the film. This results in a room that’s still bright, but not hot. On warm summer days, air conditioning systems use much less power since they don’t have to run as long as they otherwise would.

Window film is a great alternative to installing new windows, which are notoriously expensive. Nevertheless, many homeowners get tricked into buying new windows because they think that they work better. But in reality, window film works almost just as well, if not better, than double pane windows. Yes, double pane windows will make your home more energy efficient, but they’re almost too expensive to be worth it.

Installing new windows for your home could take decades to pay off. If you sell it, you might not ever get your money back. Not to mention, you have to deal with all of the craziness of the construction. And who really wants to listen to all of that drilling and hammering at 7:00 AM? No one, that’s who.

Window film, on the other hand, is only a sliver of the price of new windows and much easier to install. And, in comparison, the ROI looks like lightning. In just 3 years, you could earn all of your money back. That’s how effectively window film cuts down on energy bills.

Installing window film for your home is by far one of the best ways to improve its energy efficiency. For more information on how tinting products work, please contact our office.