Window film has many benefits for Kansas City schools the least of which is dramatically improved safety and security! 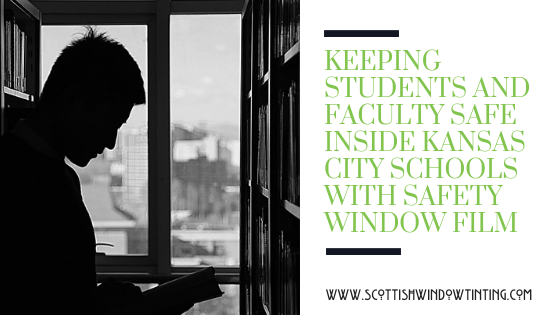 Window film serves so many purposes across many different industries and setting.  However, no one place is better served with this amazing technology than schools. From Staley High School to Rockhurst University the benefits of window film are ubiquitous and definitely needed too.

The strongest window film protection money can buy is bullet and bomb resistance.  While there is no such thing as “bulletproof” glass, safety and security film, C-bond adhesive and specialty attachment systems are a powerful combination against ballistics and even bombs.  Not only are they able to delay entry to a would-be attacker, but they also keep glass from exploding outward and hurting students.

Window Film For Protection From Accidents or Natural Disaster

Window film is something that protects students and staff of Kansas City schools from accidents like slip and falls.  This is because window film makes regular glass similar to tempered glass. Should someone fall into the glass, it will not shatter and break into dangerous shards but rather hold together inside the film, making it virtually harmless.  The same holds true in the event of a natural disaster such as a tornado–the glass will stay intact on the film even when hit by high-velocity debris or winds.

One of the most common and often overlooked threats that Kansa City school students staff face each day from the windows of their school structure is UV rays.  While not an immediate danger, over time, the rays of the sun can be harmful to both the eyes and skin of humans and be the cause of eye and skin cancers/disease. Window film blocks 99.9% of UV rays, reducing the glare of the sun and the risk of UV related disease.

3M safety and security film for schools letter from ScottishWindowTintingKansasCity

For more information on how to keep your KC school more safe and secure, contact us at Scottish Window Tinting today!