Safety and security window film is an excellent way to make your Austin school safer for this coming school year and beyond. 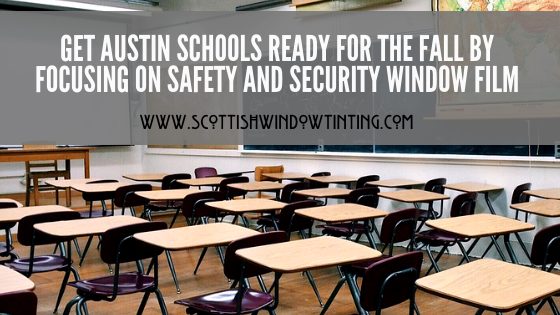 We are right smack dab in the middle of the heat of the summer here in Austin.  So, you are probably not thinking much about Fall. But the season changes fast and before you know it, the lovely autumn air will be blowing in.  Which means it is not too early to start thinking about school starting up again and preparing. One preparation for Austin schools that is perfect to do when school is on break is safety and security window film.  Since this type of window film is more involved than others and takes a bit longer to install–the kids being gone from the building works well for schools and contractors. Furthermore, safety and security window film, which is a ballistics resistant, is a critical component in an era when school shootings are more frequent than ever.  Read below to find out a little bit more about how it will keep the kids in our Austin schools safer in the event of an attack.

With so much on the line in our schools, it is good to know there are ways to keep students safer.  By installing ballistics resistant security film this summer, you will have the peace of mind this fall that your student or the students you are responsible for are much safer for it. For more information on our powerful safety and security films reach out to us today for a free security audit and pricing.