Window tint and films are similar but there are distinct advantages and benefits from one to another for your Dallas home. 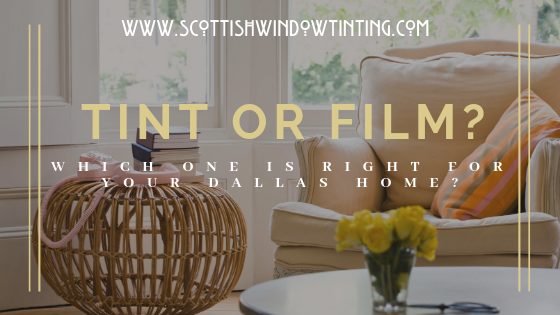 Is Window Film or Window Tinting Right For Your Dallas Home?

Is There A Difference Between Window Film And Window Tinting?

So you are ready to take the plunge and have window film installed on your Dallas home.  Maybe the glare is getting to your or you are sick of really high heating and cooling bills.  At this point, you have likely heard or seen the terms window film and window tinting during the research you have done and maybe there is a little confusion about which is which. Don’t worry– you are not alone.  Most people don’t know one for the other and the words are pretty much used interchangeably–whether right or wrong. It really boils down to what the main issue you are having on with your Dallas home is and whether there may be other issues you could solve at the same time.

When to Use Window Tint Vs Window Films

For the most part, residential structures are a place where window film is applied. This is because window film solves more of the problems homeowners here in Dallas want to fix:  energy efficiency, UV protection, and security foremost among them. Whiles some tints solve these problems, they are typically geared towards appearances/ privacy applications and have a modern, sleek or mirrored appearance which is why they appeal mostly to our commercial clients. For the most part, window films are clear while window tinting will change the shade or color of the windows.  Just as true, window tints that solve the same issues that window films do will typically not be as powerful as a film for the same purpose. Below we provided a guide

Home Privacy:  Window Tinting is one of the best ways to get privacy alone–in both commercial or residential structures. But,  decorative films are a great way to accomplish the same thing in your Beverly Hills home, since they mimic the appearance of etched or sandblasted glass.  This a more attractive home look, than say, mirrored window tint.

Glare Control:  Window tinting takes care of issues with glare on windows–this is true.  However, once again, the often shiny or mirrored appearance is more of a commercial look.  Window films, which are clear and beautiful on homes don’t just block glare either. They are to redirect glare as well and provide energy efficiency and UV protection too.

Energy Efficiency:  Window film stands heads and shoulders above window tinting in this category and puts more money in the pockets by doing so–making it an attractive home option.  In fact, window film actually reduces your heating and cooling bills by up to 60 percent and pays for itself in as little as 2 years!

Home Safety And Security:  Will window tinting offers some security type protection to Dallas homeowners.  The reality is window films are engineered to be sturdier and give greater protection from intruders, natural disasters and home accidents and greater UV protection too.

When it comes down to it, window tinting is a valuable tool in specific applications often niches to meet commercial needs. Window film, on the other hand, is soundly a more ubiquitous tool for Dallas homes looking for a number of protection and controls and saves them money too (something window tinting is not as geared towards).

For more information on window tints and window films for your Dallas home or even your commercial property, contact Scottish Window Tinting today.  We have such a wide variety of films and tints we will be able to provide something for nearly any application. Plus we will walk you through choosing the right film at the right price for your budget and needs.