A way to make airports in San Antonio more comfortable and cool is by having 3M Prestige Series Window installed on the copious glass windows. 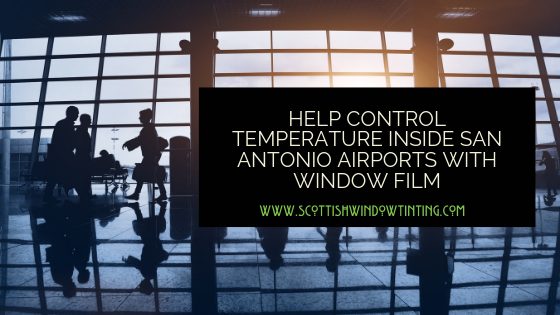 San Antonio is such a wonderful place to live. We have all the amenities of a big city with a small-town feel.  Plus we have plenty of outdoor and indoor activities year-round. In the winter it gets a little chilly here but we get plenty of sun too.  However, that sun can almost too much! That’s right, there is some truth to everything be bigger here in Texas and the amount of sunshine we get is no exception. It is relentless and can have some pretty negative consequences for commercial spaces here. In particular, airports here and across the state suffer from the heat of the San Antonio sun.  Since airports tend to have a lot of windows, on all four sides, the heat of the sun gets intense. This sends temperatures soring inside airports and makes them uncomfortable: for passengers, crew, and vendors.

The Solution To Climate Control in San Antonio Airports

With such cutting-edge performance, 3M Prestige Series films are the best way for San Antonio Airports and other commercial structures to improve interior comfort with the added bonus of saving money.  Contact us at Scottish Window Tinting today to learn more about climate control window films for any commercial space you may have!