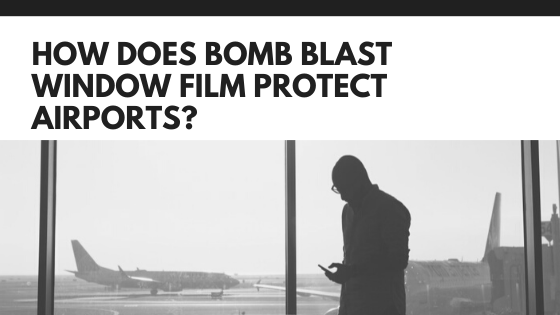 Airport security has always been prioritized due to the large number of travelers that can be housed within these commercial properties at once. With so many different security measures in place between TSA and surveillance cameras, passengers hopefully feel safe during their travel plans. One of the most effective security measures that any airport should take advantage of is bomb blast security film. Bomb blast protection film offers a comprehensive defense against numerous threats.

Bomb blast protection window film defends against high impact events like explosions, natural disasters, break-ins, burglaries, freak accidents, and more. Bomb blast security film works by adding strength and durability to your existing glass windows. When a high impact event occurs, the glass is held together by the window film in order to mitigate broken glass hazards. Broken glass is actually the leading cause of considerable injury and blast-related death. Bomb blast security film makes cleanup easier after an event since the glass panel is held together. This minimizes operational downtime for your commercial property. Bomb blast window film is a great option for protecting travelers and staff members throughout your property. Other security film options are also available for defending your property.

Scottish Window Tinting is honored to be the leading source for bomb blast window film. Our security team is comprised of security experts and civil engineers to help you maximize your security efforts. We have the most extensive selection of commercial security film, guaranteeing we’ll have the right investment for you. We’re happy to provide security assessments and deliver the cost-benefit analysis for different security films and tactical installations.

For more information regarding bomb blast window film for your airport, please contact us!