For high rise buildings, glare is one of the number one complaints from employees and could lead to more absenteeism, lower productivity, and overall employee dissatisfaction. 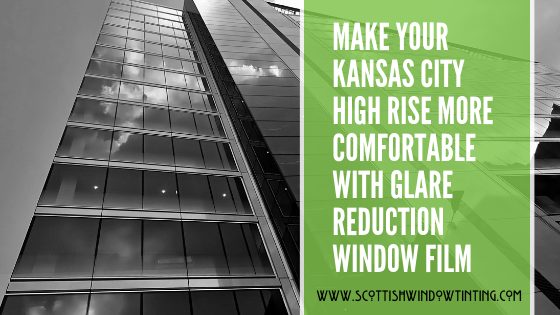 When it comes to living and working in a bigger city, high rises are a fact of life.  They conserve space and make it possible for businesses to fit into a small central location and get things done efficiently.  So, it goes without saying that skyscrapers come with a whole lot of benefits for the Kansas City business community. However, for as many problems as they solve there are some drawbacks to these types of buildings and glare through the windows is foremost among them–especially when they sit in a city like KC in the middle of the American prairie with virtually nothing blocking the powerful rays of the Kansas sun. Window film is the perfect solution to this issue of glare and benefits the employees in high-rise buildings most of all.

Glare through high-rise windows creates a myriad of problems for workers including eye strain, which leads to headaches and could even increase sick days.  By installing glare reducing window film, employers are able to actually reducing the absenteeism among their staff.

The glare of the sun obscures computer screens and grinds work nearly to a halt.  By installing window film on the windows of southern or south-eastern facing windows, employers increase productivity markedly–adding, in the long run, to their own bottom line.

For more information on glare reducing window film to increase the employee comfort and productivity in a building you own, manage or work, contact us at Scottish Window Tinting in Kansas City today!