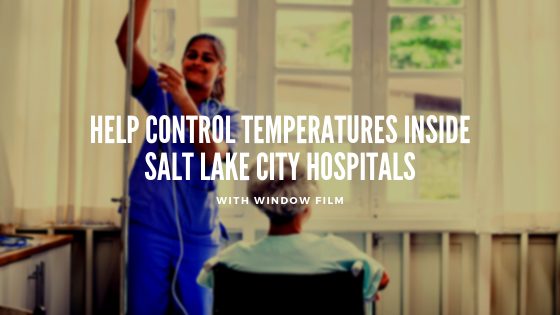 There’s no denying it. With temperatures reaching into 90 degrees and above, summers in Salt Lake City are hot. And there’s nothing worse than treating sick patients in a hot, stuffy hospital.

Hospitals are a demanding work environment. And they’re also a place for people that are very ill. No good can come from a hot, uncomfortable hospital. Germs spread. Patients get uncomfortable and complain. And your staff are miserable.

Temperatures in a hospital can fluctuate for a variety of reasons. During the summer, east and west facing windows may be exposed to the sun for a longer period of time. Additionally, the hospital may lack some important energy efficient components, like insulated windows.

Control Temperatures in your Hospital with Window Film

One of the best ways to prevent heat gain and stabilize temperatures is by installing window film. Salt Lake City hospitals with window film can reduce energy costs by up to 30% with this method. Window film filters the various frequencies of the electromagnetic spectrum so that heat stays out of hospital interiors.

Not at all. Well, it does require some investment. But the ROI is so incredible that it won’t be long until your film pays for itself. In just three years, you could get all of your money back. Some spectrally selective window films can be purchased for as cheap as $9 per square foot, which is much cheaper than installing double pane windows.

Are you tired of dealing with the heat? Find out how you can control temperatures in your Salt Lake City hospital with window film. Call our office today to get more information.